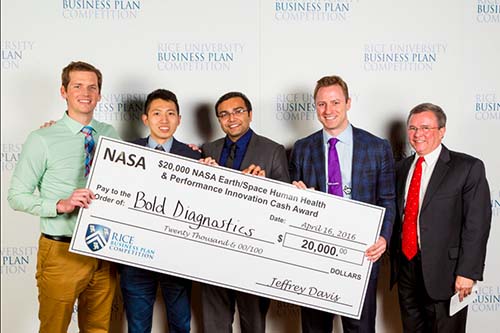 HOUSTON – (April 16, 2016) – Bold Diagnostics, LLC from Northwestern University emerged as the fourth place startup company in the Rice Business Plan Competition (RBPC) hosted by the Rice Alliance for Technology and Entrepreneurship. The annual event is the world’s richest and largest student startup competition.

Selected by 275 judges from the investment sector as representing the best investment opportunity and taking home $128,000 in cash and prizes, Bold Diagnostics, LLC competed against 41 other competitors hailing from some of the world’s top universities.

Eight total prizes were awarded to the company including:

Bold Diagnostics, LLC is a Northwestern University startup that is developing the future of blood-pressure monitoring with an innovative platform. The company’s patent-pending technology is currently being validated through an IRB approved study at Northwestern Memorial Hospital. The team members include Northwestern University Center for Device Development (CD2) Fellows Jay Pandit, Kyle Miller, Sean Connell and Andrew Wu.

The prizes were presented tonight at a banquet at the Hilton Americas-Houston that concluded the three-day event, which began April 14.

This year’s competitors were the most diverse in the history of the competition and came from top universities around the globe. The teams were chosen from nearly 400 entrants to compete in four categories: life sciences; information technology/Web/mobile; energy/clean technology/sustainability; and other. Each team made its case in 15-minute investment pitches and a rapid-fire 60-second elevator-pitch contest on the first night of the competition.

Since the RBPC’s inception in 2001, when nine teams competed for $10,000, more than 161 competitors have gone on to successfully launch their ventures and are still in business today; another 15 have successfully sold their ventures. Past competitors have raised in excess of $1.3 billion in funding and created more than 2,000 new jobs. The 16th annual RBPC was hosted by the Rice Alliance for Technology and Entrepreneurship and the Jones School. For more information about the RBPC, visit www.ricebusinessplancompetition.com.